Finally, I am moving the chillies from their warm sitting place to the poly tunnel. I have potted up twelve pots into larger flower buckets. This is half of this years chilli cohort, with another two dozen pots to be positioned in the poly tunnel. Potted up today were Purple Haze cayennes-two plants, with a third waiting at home-jalepenos, hungarian hot wax, prairie fire, patio sizzle and sparkler. These are plants that have had something of a growth surge recently, and one of the purple haze plants has even started to form flowers. I have taken this as an indicator that these are now ready to move home and head to the poly tunnel. These are the final pots for the plants, and I don’t anticipate potting them on again.

You can see the you tube version here.

tomatoes and sweetcorn waiting in the wings 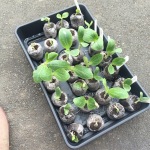 Squashes to be potted up

potting up the squashes 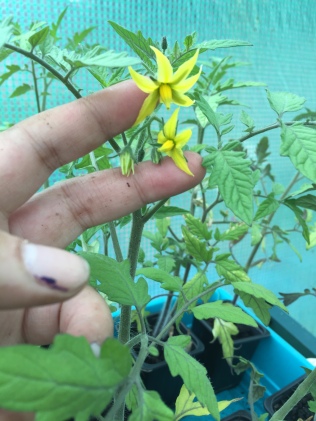 Tomatoes and sweetcorn to sit tight for a bit

Squashes also need to be potted on, and I didn’t realise quite how many I had. I counted just over two dozen plants; luckily for me, I can share these with Mum. There are four marrows in there, which she will no doubt have designs on. Marrows are really not my thing, but Ma can work magic with them.  I have yet to sow pumpkins and butter nut squashes; to be honest, I might cheat in those cases. I can never get pumpkins or butter nut squashes to actually germinate. Seedlings tend to be okay and I can look after them from that stage onwards. There are a few patty pans and yellow scallops, these become the coolest of space ship courgettes. There are the standard green courgettes as well as other yellow ones.

The poly tunnel is now occupied with a number of different seedlings. Tomatoes and Sweetcorn  have been basking in sunshine for the last few days, and I have taken the decision to move them to the poly tunnel by way of a half way house. The Latah variety and a few others have already started to flower, so moving might be useful. The tomato cohort as a whole are probably not as tall as they could be-they were sown later than usual-and are starting to look a bit weary of their pots. The aim is to plug these into raised beds in the coming week if the weather remains fair. I just need to keep an eye on them in the poly tunnel, as I remember having a small panic last year in nearly cooking plants as the poly got rather too hot. There should be enough water in the gravel trays though, for the next couple of days if the temperatures remain; the vents are also open.

It was world naked gardening day today, apparently. I can assure you that I fully clothed all the time.