You can also find the video here.

It is the Whitsun Bank holiday, the end of May Bank holiday, and this means planting out. The tomatoes and squashes that have been hardening off the last week or so have now been moved to the plot and plugged in. There are two varieties of tomatoes, roma and marmande, and a quite a few different varieties squashes. I think I have most of the courgettes and marrows, with Mum having butternuts and trailing ones.  All of the plants are in raised beds as I have had more success this way.  There is also a raised bed that has incredible sweetcorn with squashes nestled amongst it.

Aside from the tomatoes and squashes, I had bought some chard and spinach. These were plugged into the open ground, and it was a case of “Punam, plant your chard in straight rows.” Well, the rows are a bit wonky, and there also some wiry leeks placed into the ground as well.

Beyond this, I have also broken with tradition and direct sown runner beans and climbing french beans. Ordinarily, I would try to sow them at home and in modules. However, this year the at home germination rate has been dire. This therefore is something of an experiment, with seeds being sunk into the soil which in some places is rather heavy clay.

I would have direct some further chard and spinach-I have some chard, that in true trekkie fashion, is Vulcan chard-and would look pretty and be rather useful. 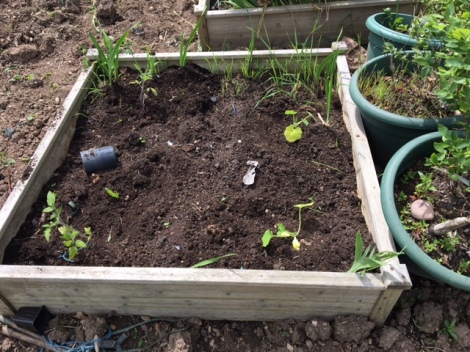 This is the first time that I am planting and sowing chard and spinach on the plot. I realise that these are going to need a lot watering; without being watered, and if they get too hot, the plants wilt and will also bolt. I am concerned about this, especially as Mama F has been known to leave minutes after having had breakfast to go water her spinach and chard.  I had thought that these were simple, something tells me that this isn’t quite the case!

Tomorrow, is another day and the plan is to continue with the plot. There are beds to be cleared and weeds to be pulled up.  The vulcan chard remains to be sown, and this will be the next thing to be done.