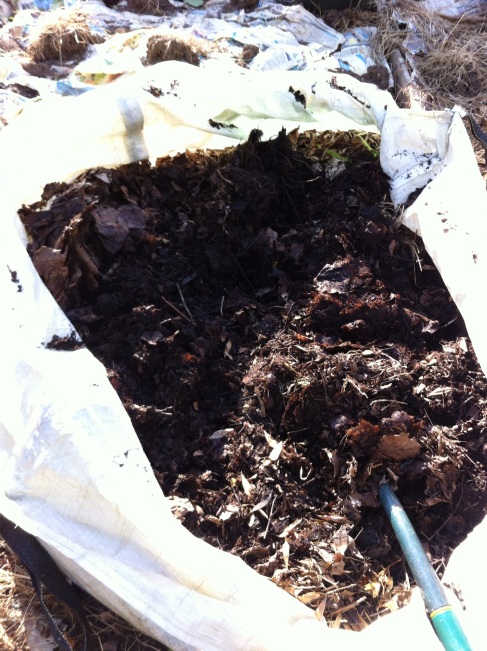 This time last year, there was only the one builders bag compared to this years for. At that stage, I had started to collect leaves rather late on. Must have been about late November, and the last remaining few were hanging about. This one bag, was filled with approximately eight to ten bags and these were then left to cook. I think may be once or twice, I may have added some compost activator. I don’t think this did any harm.

Taking a matter of months, the leaves decayed and broke down. Forming the dark material that you see wih the magic fork stuck into it. That was summer this year, once I had built the beds; I wanted to fill them. I don’t think, that at that stage it was entirely fully cooked. I have heard variable estimates as to when it is ready to go.So half cooked, it is in the raised beds. Covered with newspaper for some protection against flying weed seeds. The one builders bag, filled four 1m x 1m beds. So all in all, that is quite a lot really. Not bad at all for a first time experiment. This year, there are four beds. There are also more beds. With 12 beds in all, they will all need filling.

This year, as soon as the descent of the leaves started; I was collecting. Well, it was mostly Dad and and Grandad Mike, but that’s technicality. Between us, 13 bags a week were collected and taken to the plot. These were then emptied into builders bags and also the raised beds.

I have yet to understand the fill science of what actually goes on. I think the breakdown is bacterial, and the decay is facilitated by moisture. I really couldn’t tell you the exact details!

So whilst the raised beds are part filled, next year, the aim is to fill these with compost. The builders bags may well be used to top these up. However, the plot being heavy clay; the area not covered with raised beds may benefit from it somewhat. That is, however, if it doesn’t say water logged.