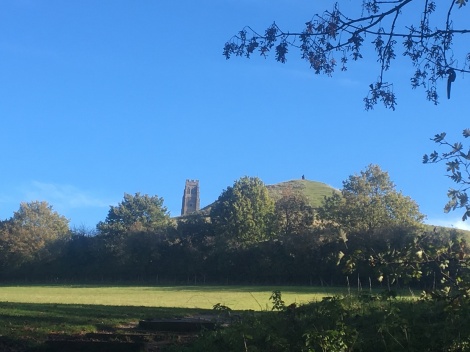 Apparently, Glastonbury is magic. An interesting hypothesis, that I decided to test out. This was effectively my four day summer holiday. On my list, was the tor, the abbey, chalice wells and also the Goddess temple. This was a time to reflect, rest and colour my soul. This was also an adventure that I wanted to make the most of.

Getting to my digs, seeing the Tor was something of an experience. Its quite imposing and my immediate thought, was how the flip to get up there. Luckily, the taxi driver told me the safest route. Taking it, I realised that it wasn’t easy getting up there. I’m not the fittest of people, so taking it slow was key. That was rather important.

Journeying up the Tor is a process of reflection. You also meet interesting people along the way. You all have the same aim, to get to the same place. Part of me felt as though I was channelling Chaucer on the ascent. I did move slow, I took my time to savour it. Getting to the top, I was met with people greeting the sun. There is magic at the Tor, something beyond words. I did struggle making the climb, and I was aware of my own capacity. I made that climb, I got to the top, no matter how much I swore as I walked and wanted to give up. At the top, there is so much to take it, to survey what is before you.

Coming down, is a different feeling and leads you to Challice Wells.

The Abbey, is something out of this world. There is absolute magic in the air there.  I spent hours there, absorbing it all. There is the alleged grave of King Arthur. Though I don’t think I felt his magic there. I felt the magic of people.

The tree. Oh, my, the tree. I think it was a Maple, but it is a magic Maple. The only tree in 35 acres that was so vibrantly red. Standing there, it was breath taking, it was grounding and a process of meditating. There was just something about the tree, it’s beauty and being a force of nature.

Talking of power. The Goddess temple. Go. Absolute serenity, with the essence of the divine. I felt such calm, such power, I couldn’t possibly type the exact nature of it.