I forget which week we’re on, but the lock-down measures remain in place. All for good reason; safety is paramount.

This week, has been about reflecting, about getting my hands dirty and also learning new skills. 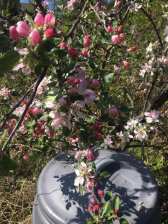 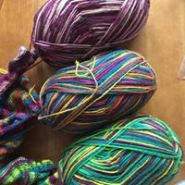 The allotment has been on my mind a great deal. There is a lot to do, the plot has been left unloved for sometime. This, does feel rather overwhelming, as I have mentioned before. As such, I want to do little bits at a time, as much as I can.

I have an apple tree on the plot. In fact I have two. One is a Falstaff, the other is Braeburn. Both are currently in beautiful bloom with lovely pink and red blossom. The Falstaff is safe, secure, growing well. The Braeburn on the other hand, would be eight foot tall. However, due to storm damage,and not being staked properly, it is now growing bent over backwards, much like a fictional Japanese willow over a stream. I spent some time this week, propping it up. There was no way, no how, it was going to snap up straight. It is actually wonderfully well established, and happy too. I’ve never seen so much apple blossom on one tree. So rather than work against the tree, I want to work with it.

That was fun. Apart from falling over a raised bed and getting bruises.

And where did I get shoulder strain from?

I’ve been knitting for ages. Never purposefully though, and never actually finishing anything. So when a colleague told me about her sock knitting, with a member of the ‘Grape Gardening Family’ signposting me towards a book for knitting with flat needles, I had a ‘oh, yes?’ moment.

Two weeks, were spent, in between teaching and counselling, knitting like there was no tomorrow. I kid you not. I had the same brain fury that happens when I have a writing project that is all consuming. I pull the same thinking face too.

Flat needles. I’ve always knitted with these. I do have some circular needles, but they are still a bit abstract; I’ve yet to wrap my head around those. I don’t use DPNs-double pointed needles. That would also be a stretch of the visuo-spatial sketchpad.

Immersed and enthusiastic. I sprained my arm. There was three days sulking, and I have resumed knitting. I will also venture back to the plot too, at some point.

The socks, a pair, were completed. Yes, they are wonky, with one bigger than the other. But I have a pair of socks! Two weeks ago, I couldn’t read patterns, never mind knit socks.

(Yeah, Mama F has been helping too. I sat elbow to elbow with her, explaining the pattern. She’s a much more proficient knitter and crocheter than me, she can knit with her eyes closed. Doesn’t ever use patterns. But socks were new. She has since knitted a beautiful pair, that really are a piece of art.)

I’m really very proud of my wonky socks, and I have three more experimental ones in my needles. I’m using a mixture of bamboo and metal needles. The bamboo are less heavier, more warmer. Smaller metal needles do help with precision and better fitter socks.