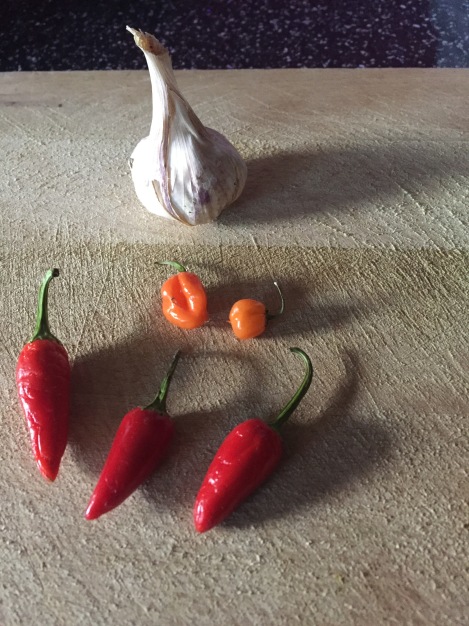 As we approach December, seed garlic has been in the ground for a while. Depending on what variety it is, is only starting to send up green shoots. There have some rather harsh frosts already, and these are no doubt having some form of effect on the cloves planted. There isn’t an awful lot else on the plot-well, Mama F’s- so garlic is certainly something to keep an eye on.

It has been a long time since I cultivated garlic, and Mama F was rather eager to make sure she had some growing. When I have planted garlic, I have always planted it in the October-November window. This would then lead to a crop in June, July and August. We have both soft and hard neck varieties, with Elephant garlic in there as well.

Sowing and growing your own garlic is relatively straight forward. Break up the bulb, to then separate out the cloves. The ground should be well drained, free-draining ideally. Heavy clay tends to be quite sticky and gloopy. Make a hole, using your finger or a dibber. Slot a clove in to cover up to the tip. Don’t leave the clove exposed, as you may have to then fight with the birds who eat it before you do. That is mostly it, you might want to feed the garlic in the Spring. Between now and then, green shoots should rise up and the bulb start to form. If you are a particularly windy site, you might find that green leaves start to burn but this is nothing major to worry about. Keep your garlic weed free, leave enough space to clear any wayward weeds.

Garlic varies in it’s flavour and it’s strength. Mama F requested strong flavoured garlic, it is a staple of the many dishes that we have in our kitchen. I do find that home grown garlic has one hell of kick compared to it’s supermarket equivalent and this does varies across the varieties. The size of cloves will also be different. I’m not sure how that impacts on flavour and vigour.  To be honest, I wouldn’t recommend planting your left over supermarket garlic. I’m not sure that would be useful.

Be aware though, there is a nasty critter called Allieum Leaf miner that rather likes all things garlicky,  onion and leeky.

With Garlic being mostly quite straight forward, Chillies are a different kettle of fish. There is both an art and a science to growing chillies. It is early, very early to start to sowing and growing chillies. Now, is the time to think about what you want to grow and how.

There is a whole armada of capsicum out there. From the superhot, to the super sweet bell peppers. Take your pick, choose your pepper. Your choice will determine how things kick off. In the past, I have sown chillies a day after Boxing day, in a heated Propogator. Chillies, depending on their variety, germinate at different times. Sow too early, you have leggy critters. Sow too late, and you might one or two chillies. Looking after them, you have to strike a balance. You could have beautifully leafy, luscious beauties and no chillies. Or you gave not so leafy, but fruitfully abundant plants that have you ready to  make chilli jam. I don’t think that I have ever grown one plant that is the same as the next. There is also the weather and making sure that plants are robust. Watering too often, plants might be okay with it, and so amble along. Arid and dry, plant has a panic and sets fruit to survive. Growing chillies is not boring, and all bets are off.