If you ask my Mum, the tomatoes have been looking routinely quite sad. They needed watering, and they were cheered up with doses of haitch two oh as and when required. What was more important, was sunshine. Sunshine, which has been somewhat absent and has finally turned up. And very welcome it is too, as it has kick started and renewed feelings of optimism as far as the allotment is concerned. According to the weather people, the sunshine is going to be around for a while; a week at least. With that in mind, the tomatoes have been sent outside to the path in Dad’s garden to start the process of hardening off. Unlike last year, where the tomatoes were all grown under cover; these are going to be outdoors and in raised beds or open ground. Currently they are all having a strop in pots, and I am hoping that if the plants sun bathe for the next few days that I can then take them to the allotment and bury them a bit deeper. The appearance of yellow flashes, tomato flowers, suggests that these all need to get a wiggle on and fairly soon.

This year’s cohort of chillies are the current room mates of the tomatoes, and will also need to be removed to the poly tunnel and be potted up. There are chillies here that are supposed to be small and stumpy, as it were, and those who are supposed to grow tall and abundant. I did sort them out into two groups to make the sorting out easier. The taller chillies will be potted up into large flower buckets, whereas the smaller ones are going to put into pots as they are not expected to take up a huge amount of room. In the last few weeks, the chillies have rather had something of a grow spurt and on time. In the next four weeks they will grow further before being moved to the poly tunnel. Having been sown a little late doesn’t appear to  have to knocked them too much.

chard in the poly 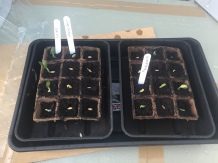 With the chillies hitting a stride, there are also emerging seedlings. Recently sown cucumbers and squashes have started to come through. With the frost window remaining open until the next May bank holiday, both of these have got four weeks to grow and become more robust.  In my experience, squashes grow very quickly; you sometimes have to re-pot them to key up. I am hoping that with the four week window they are suitably sized for planting out once that they have been hardened off. With the cucumbers, I do intend for these to be planted and grown outside. I have previously grown crystal lemon outside and harvested a crop.

Seedlings are sat on the sidelines, mean making crumble. Last year I was able to harvest trugs full of apples and these were then frozen alongside some plums. Today has been spent making a plum and apple crumble. The second in four days!

With the crop of a previous year being used up, we can look to the future crop. A walk to the plot meant finding cherry and apple Blossom. The two cherry trees, Sylvia and Morello, are new additions to the plot; so it was rather heartening to see white buds n the Morello, but a lovely white bloom-just the one!-on the Sylvia tree. I wasn’t expecting to see any blossom on them this year, so I am really quite surprised to see blossom. I did check on the Concorde pear, that appears to have taken the frost on the chin, and is still looking frilly. The darling peach tree does still have a couple of deep pink blooms, there had been half a dozen; I did fleece at one point only for the wind to disagree with the shrouding.

The otherwise heavy clay of the allotment has had a chance to dry out. This has been to the relief to the heritage garlic that Marshalls were kind enough to provide for the plot. Garlic is wonderfully resilient, and is actually doing quite well given how much rain it has suffered. There are no signs yet of any bolting, and the ground is weed free so the bulbs should be making the most of the nutrients available from the clay.  The foliage is still very green and leafy, and with another eight weeks to go there is still a lot of growing to be done.

I do like it when the post person delivers something that you’ve been hotly anticipating. Copies of ‘Sow Grow and Eat’ landed on our doormat and rather made my day. My thanks to the fabulous Howard-(the artist who once sunk spuds, remember him?) for having put the cover together. You will also spot that the Loldeantimber trug is now something of a cover star, it also appears in the book. Given how the trug is used so much on the plot, it was definitely going to end up in the book.

Potatoes waiting in the wings

There is rain scheduled, it is after a bank holiday. Before it arrives, I have taken this opportunity to wander down the plot, sink potatoes and check on the fruit trees.

First with the potatoes though:

Kestrel and Lady Balfour potatoes have been sunk into raised beds. I still have to sink pink fir apple, once I have filled the other beds with ‘orse poop. I put the seed potatoes into raised beds as there is better drainage, less resistance for the forming tubers and previous experience has meant a big, quite successful crop. I’m not sure yet if there will be any international kidney this year on the plot.

There was also the opportunity to look at the young fruit trees that are planted on the plot. With the site being windy, they could do with some bracing support so that they don’t keel over. I did quick count, and found that I had quite a few fruit trees, I guess I don’t need to buy any more! In the picture above, you see the morello cherry tree. This one, along with the sylvia, moor park apricot, darling peach, pear du comice, czar  and victoria plum were all tied to a stake sunk beside them.

With the exception of the Czar plum tree, all of the trees appear to be waking up and have buds forms on their boughs. I am not too sure about the Czar, as it has always been a little bit of a miserable looking tree.  The plot most certainly has it’s own little micro-cosm that doesn’t fit in with the rest of the site; i think the peach is the only that is sending out pink fuzzy buds. Have been watching it closely and willing the bud to burst.

Cold and damp, the plot was not particularly pretty at the end of the last week. A stark contrast to the week before when the plot was much drier and the mud wasn’t so sticky.

If you can’t access the video above, you can find the You tube Video here

I have planted four trees on the plot. These are morello and stella cherries, as well as a peach called Darling and another Victoria Plum. All being well, these will start to establish and in time produce fruit.