Ordinarily, I don’t like Valentine’s day. It’s all very much commercialized hearts and flowers; I would be at home, in a sulk and watching box sets.

I decided to stop with the sulking, fly solo and indulge in one of the many things that make me happy. I went to see Shakespeare.

Not just your average Shakespeare show, either. I saw a live relay of Twelfth Night. (MAC Birmingham, you are awesome as always; spending my childhood there, this was a welcome return visit.)

I am no stranger to Stratford-upon-Avon, and over the last three years I’ve watched quite a bit of the canon. Greg Doran et al have done a cracking good job.  Sadly, I was a bit slow off the mark getting tickets for Twelfth Night in Stratford; so when news broke that it would be relayed live, I might have jumped a bit. Putting my membership of Sgt.Pepper’s lonely hearts club to one side, I forgot that it was booked for Valentines night.

The fact that Ade Edmondson was part of it, did rather make me smile. I grew up with re-runs of ‘The Young Ones’ and know of Bottom and Hotel Paradiso. I had intrigue as to how he might tread the boards. Beyond that, I went to the show with an open mind.

Thank goodness, I did!

I didn’t realise the Indian aspect of the production and the late Victorian setting. Two universes don’t collide per se, but merge and combine beautifully. The director and the costume designers have married these two concepts in a really rich, vibrant and effective way.

Then there is the cast.

In the last few years, there has been much said about the lack of BAME actors in theatre, in adaptations/productions of Shakespeare. This cast, was epic. I’ve yet to see an RSC production that isn’t diverse, doesn’t include BAME actors and doesn’t celebrate diversity. This production is more than Ade Edmonson’s Malvolio-he is truly extraodinary, though-there is a lady of Asian Ascent in a lead role-has been done before in midsummer’s night dream.  The fool-Beruce Khan-is cracking good comic relief. Belch and Aguecheek need their own sitcom.

Twelfth night really is about love turning the world upside down. The themes of falling in love with the wrong person, the wrong person being in love with you, being wronged by love when people quite literally mess with your head-Poor Malvolio-then there is gender, identity and sexuality. Shakespeare toyed with topics that four hundred years later are still in debate.

Watching this show, I laughed; I forgot that it was Valentines day. Remembered, that I love Shakespeare, that it reflects the world that I live in. This was wonderfully crafted, yet simple and effective production. I’m glad that I saw it, I’m glad that the cast was diverse. Dinita Gohil is great as the disguised Viola and a true inspiration with Beruce Khan, who wouldn’t be out of place in a Bollywood GOT. These two cast members really stood out for me as inspiration for future generations of BAME actors who want a place on the Shakespearean Stage.

Twelfth night really was a cracking good show. Strongly recommend you watch it. That you love, laugh and live it.

One episode of Shakespeare down, two more to go.

I am part way through a year of sampling the Shakespearean canon. Since August last year, I have been collecting what I can of the plays. I have seen As You like it, Hamlet, Richard II at the RSC Stratford, as well as Midsummers night Dream with an all Male cast at the Belgrade theatre Coventry. And there was twelfth night. Today the Shakespearean sojourn continued with Henry IV part one. Part two is penciled in for the summer, as well the Scottish play-I refuse to write it-two gentlemen of Verona, king Lear, as well as loves labours lost and won. King Lear is by the National theatre and will be a streamed live screening, much in the same way that I saw Richard II. Is the production directed by the Hollywood heavyweight-if he can be termed that-Sam Mendes. Particularly resonates, in being one of three daughters. Not sure which of regan, gonerail and Tegan, I am, but we have yet to collectively drive Pops potty.

I think I have missed Antony and cleopatra, Coriolanus and the other gored mess Titus Andronicus. But I can’t say I’d want to see them. Though that is doing The Bard a disservice; his combination of language and historical commentary is entirely the point of watching his plays. I might get around to them eventually.

As you like it was the first play I watched at RSC. A gentle introduction, fluffy. But dragged along with musical whimsy. There was a lot drum rolls and guitars in there. But the duke was good.

Hamlet didn’t leave me particularly enthused at the RSC. Went expecting dark pathos, a bit of brooding, with a dash of the schizophrenic Hamlet. The lead protagonist laughed, giggled and swang from that to miserable self loathing. His red hair and balding pate a constant distraction; he had nothing on Claudius with his double breasted suit, spats shoes and dull metallic crown alongside the Queen in her siken dior-esque dress. Hamlet, we could have liked, you know. There has been much noise of the role being reprised by Benedict cumberbatch next year. As much as I would love to go see it; I won’t be. Because of the hype, and I refuse to pay up to £75 for it. The same could be said of Jude Laws’ Henry V. Didn’t know to late on in the run. £75 is three times the cheap seats at the RSC. Okay so the cheap seats at the RSC have a restricted view, but I still wouldn’t pay £75. Even groundlings in the time of the bard would throw a Hissy fit; and Shakespeare didn’t worry about his sets to warrant such a kings ransom. Want young people to engage, drop the prices. Simples.

Richard the second was a live streaming; with much attention focused on David tennents blonde locks. Pretty as he was-with nail varnish all beautifully manicured-out acted by the seniors that were the Duchess of Gloucester and John O’Gaunt. Not to mention the fella who played Henry Bolingbroke. Built like a rugby player, he was always going to trump the airy fairy fluffy Richard. John o’gaunts speech was particularly important to watch. I’d read that speech as an A level strength of English Lang/lit, complete with an England shirt. If it wasn’t for etiquette and propriety; I would have stood up and cheered him on.

Midsummers night dream toured the Belgrade theatre with the propeller company; with an all male cast. Just, as Shakespeare would have had. I have never laughed so hard when it comes comes to Shakespeare. There were a number of interludes where I thought my sides might split. Men in tights and tutus, amusing to say the least. As were all the bottom jokes, they have stood the test of time.

Twelfth night at the WAC was not so good. Can’t remember who was performing, but there was a notable lady from Holby involved. Short, must have been abridged; it played to a half empty theatre. Okay it was a Saturday afternoon; but even the party food of pizza distributed part way through, did nothing to make it better. With instruments just sat across stage, there was a double bass playing at inopportune moments. And the rather bizarrely yellow rugby socked Malvolio(?) headbanging as though a heavy metal fan was surreal to say the least. The use of a garbled synth, would have annoyed a certain Stevie Wonder.

So is there a hooray for Henry?

These is for young Prince Hal, less so for his father the titular Henry IV. Especially when the show opens with a half dressed Henry in a bordello. The first act is all about Henry the Younger, having the time of his life; being a debauched bachelor and playboy prince under the wing of a permanently inebriated Falstaff. His father is irritated by whatsisname Henry Hotspur; a story placed on the back burner and only just foreboding. Your attention is diverted away from it by falstaff and frivolity. Watching young prince Hal have fun and not care about anything is given precedence over affairs of state and the job of being a usurper king.

This avatar of Henry, is not as good as the Henry Bolingbroke of Richard II. Smaller in stature, less imposing compared to his ascension in Richard II; perhaps that is the point. Even the recycled earls of Northumberland and Worcester out play him at being menacing statesmen. Simply doesn’t have the broad enough shoulders to be the king that deposed Richard. Falstaff is hilarious, Henry Hotspur marvellously mad and Machiavellian. Runs around as though a crazy creature, full of hyperactivity and arms flailing. If he was a fly, you’d want to swot him. And when Henry Hotspur takes his time dying, you find yourself urging him to hurry up. I was desperately trying not to say ‘worms’ and was glad when the Prince of Wales did.

The second act, shows just how heavily political pressure lay in Shakespeare. Henry IV is barely on stage, it is all about Junior-who is rather pretty. Junior suddenly remembers who he is, and actually does his job as Prince of Wales the heir apparent. I can only imagine that Henry senior has some more stage time in the second part; otherwise the two plays should just be renamed. Alas, that would make for a redundant Henry V.

Falstaff and bluff Prince Hal are the saving graces of an otherwise fairly toothless story. If it wasn’t for their humour, you’d want history re-written. Henry IV really isn’t built to be the lead, and the intrigue lies with junior as the man who will be king. 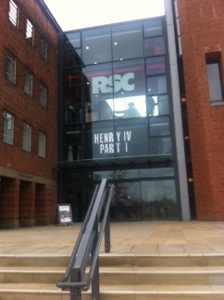