Go find a body of water, the horoscope said. Go somewhere near the seaside. The universe kept on signposting adventures, a getaway, a chance to take stock.

I headed to Lake Garda.

This is the second Italian Lake I have visited, with Como being the first. The lake is pretty, the town where we stayed was lovely and it was fabulous opportunity to have a some down time.

I also turned one year older and thirty three is a the same age as a certain other someone with whom Easter is associated. I didn’t and won’t dwell on the age, the getting older. The silver bothers me, but I’ve been going grey since I was sixteen and I won’t always carry off being a brunette or raven haired. Yes, silver, and not grey.  I have so far resisted dying the barnet; not sure quite how long this non-compliance with social norms will last.  Silver hair doesn’t make me so marketable…I guess.

First there was Verona. 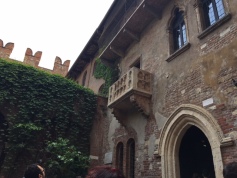 This place piqued my interest from the Shakespearean angle. There is the balcony that (allegedly) inspired the poem behind the play ‘Romeo and Juliette’ so every where you see I heart Verona and ‘City of love’. (The cynic in me, took heart from the story about the merchant, who jumped the bandwagon with this is Juliette’s balcony, come have a look) I thought that was Paris, but anyway;  I didn’t feel the love for the love. Verona, yes; beautiful, lots of shopping and culture at ever corner.  I couldn’t help but think that that Romeo would have needed drainpipes for the balcony though. I’ll be damned if I’m shimmying up towards any balconies for a Romeo and anytime soon. The neighbourhood watch would be rather displeased to say the least!

Then there was the city of canals. Being a born and bred brummie, this was going to be interesting. Birmingham has more than Venice, we also have James Brindley. So you know, tough competition.

And this is where I felt the love. This is somewhere I would go back, and with someone special when he turns up. The Grand canal from the Realto Bridge is epic; the sheer size and the life that exists on the canal is pretty damned amazing.

As for the pigeons.

Seriously, they are low flying. Dodge them. 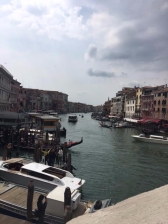 I recall Venetian masked balls…ahem as it were.  I bought one, as you can see; it’s not sparkly or has half a bird attached to it but when in Venice. Then there was Venetian glass. Again, this is meant to  be pretty epic.  I frequented pen shops in both Verona and Venice, and felt like a kid in sweet shop. I feel as though my pen collection is not yet complete. There was window shopping of the Parker Sonnet in matte black, just to see what the deal was. But for now, that would not be entering the writing implement collection.

Venetian Glass plus pen and notebook was going to happen. I kid you not, I sampled a glass nib and I nearly keeled over. But I like my nibs and pens metallic, so I found one that I liked.  Rather than being a cartridge/converter pen, this glass stemmed pen is a proper old school dip in well sort. The notebook is covered with the seal of Venice; a lion with a book. Two motifs, that I can only my best to appreciate. No idea what I might write inside, but it will all come in time.

Was a very interesting adventure, and by the water.