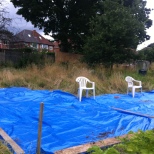 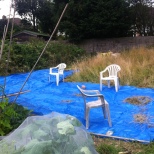 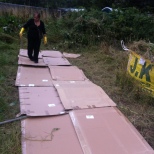 flattened cardboard. The rest has newspaper

tiger tiger-these two often come and watch me. This is not my plot!, but neighbouring forlone one

I might be getting towards the tail end of my summer holidays, but Mama H is officially starting hers. So that gives her plenty of time and impetus to give me  a hand. Project Othello, concerns the top end of the allotment plot. The existing half, the sukh shaanti garden is 88 square metres. So I Imagine, that the rest of the plot is of  similar size. I have yet to go down there with Dad’s measuring tape. When I have figured out what I want to do, I shall definitely size things up. I am banned from putting raised beds there-by my mother-so the odds are that this bit, will be more manual labour orientated. Influenced, heavily, I think, by Ma’s own GYO experiences as a child.

This patch has been fallow now for approximately a year. Previous owners had cleared it, and Rotavatored it. But sadly, through no fault of their own, were unable to attend to it.  We musn’t begrudge them that, they did genuinely have a go. Unlike the neighbouring plot, where you will see the tiger tigers lurking. That is another issue. It makes very cross. That as someone has paid their rent, they cannot be asked to vacate. Anyway, that is my soapbox. Except when that plot seeds weeds all over mine. Have seen the owner all of four times in my two years there.

Anyway, Project Othello. Why the Shakespearean name? It looks awful on the top, but beneath there is something that has a lot of potential. Case of Othello taking on Iago and winning. We like Othello, for all the nastiness he encounters and overcomes. I now have visions of a nasty Christopher Ecclestone…moving on, though.

There has been a lot of debate, wrestling with what to do. Do I weedkill, pull up, cover? Two years ago, I had to just pull up the grass and weeds. The plot had been dressed with weedkiller. I didn’t have that luxury this time. Weedkiller, also needs dry days to work. Which, despite the current state of Blighty summer, is calling take a chance on things. For the moment, Mama has made short work of pulling up grass and chopping down. The best part of which, is being put into builders bags to compost down. Though, it could also be chopped down and covered with the tarp. Essentially, that is what is happening. That which can  be pulled, is being pulled. There are lots and lots of brambles along the border and also by the back where the fence is. Not sure whether these will be chopped, killed, or cultivated. Might even keep the odd invader out. The cardboard and newspaper should help block out the light, and facilitate things being broken down into the soil. We are doing our best, to stop seeds getting everywhere. Not an easy task, I tell you.

Those two cats you see, I don’t know who they belong to; but they often come and skulk around the plot. We startle each other, as they exit the grass. But today, these two just sat there having a chat with each other.

A third sorted, and more to come.