One is not talking about slimers or slugs. But this:

Had seen one in wilkos, and thought it might be nice as a gateway to Project Othello. This really was a two person job. Ma and I had to fight to out it together. The holes were wonky. The instructions unclear. However, Ma and I laboured on, and managed to get it raised. 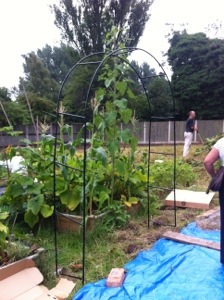 Asked a lovely plot neighbour-he in the background-to help sink the legs. I concede that it’s probably not very robust. In fact I need to fix some of the rungs that are loose. But it might serve its function. All being well, red and yellow roses will climb up it. And perhaps will line the side if it too.

Project Othello is now levelled entirely. It as neat as it will be, at this time of the year. The area marked out will dug, for the possible, hypothetical poly.