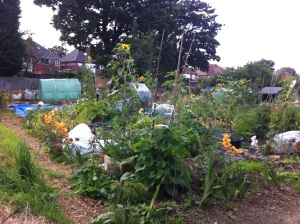 Evening all, the first day of the Christmas holidays has me in a reflective mood; trying to figure out what to do next on the plot. The weatherman has just forecast a very wet, windy and turbulent festive period. Leading me to think about making plans without venturing outside and getting soaked to the skin.

The whole plot does required tidying. Winds and rain has tossed around bits and pieces as though they were flotsam and jetsam. That can be easily remedied in just walking around and putting things back in their places. The nature of the wind, the buffeting on the windows always makes feel ill at unease. It would sad, if either the wendy house or poly took flight as though some farmhouse in kansas. The allotment site is windy, and things have been known to take flight before. So always unsettling to hear the wind whistle and then moan.

The inside of the poly does require tidying as well, Since it was raised, it has merely house pots of chillies. There wasn’t, sadly, a plan to start filling it over the winter. There was, a hope that it would actually survive the winter, and I could then focus in the growing season in terms of planting and growing. A notion, that set about when sorting out the seed stasher. Established that I have lots of cress and basil seeds, not likely to sow them. All freebies, actually. Perhaps suited to a loving home. As well as lots of black cherry tomato seeds. Enough to cultivate a small forest. Didn’t have a vast variety of them, as I had thought. This year, the tomato crop was prolific. Fruit didn’t go red on the vine, but it was bumper crop. Good use was made of them all. I didn’t label any, so that makes it difficult to consider what I should or shouldn’t think about sowing. Since I didn’t have a poly when these were being cultivated,all of the tomato plants were planted without cover and in raised beds. The question then being, what shall I plant in the poly. I am not likely to sow seed directly. There is a mistrust here, of slugs and such like. Critters knibbled on the potted chillies, which rather brassed me off to be entirely honest. I have no sympathy for the creature that gnarled through the jalapeños.  That, my friends, is called karma.

Mother has had word with me, about the number of plants I sow. Don’t sow so many, being the long and short of it. The only concession that I make, is that I tend to get carried away, and not all seeds might germinate.

With the polytunnel, I am hamstrung by the size. It is not massive. A nice neat size of 3m x 2m. Inside, there is a wooden plank down the middle-the one pops constructed, remember-leaving a horseshoe shaped space to sow things into. I would like to cultivate plants so that they are at least 8-10 inches high, whatever they might be, before sinking them into the ground of the poly tunnel. There might have to be the blue pellets of doom, by way of preventative measure.

Must get the inside of the polytunnel weeded though. Being warm and light inside, there is a fair bit of grass that needs to be removed. A process that might involve the inside actually being dug over once more, and each offending blade being painstakingly removed. That plays on my mind, in making sure that I have an adequate canvas to play with. It’s also a bit grubby on the inside, watery tidemarks that need to be wiped down.

Other than tomatoes, I have a list of things that I would like to dabble with. As observed in a previous post, I would like to grow some superhot chillies. So chillies and peppers will feature, hopefully. Again, despite what Mama H has said. A re-match with Aubergines too, having failed to get a single fruit last year. We had lots pretty lilac flowers, but not a lot else. Cucumbers are a potential, though I only have the outdoor variety at the moment. May have to look into that. And melon. Something that may require a structural investigation, as they require a bit of support.

And all in the confines of 3m x 2m.  Defying the laws of physics, and turning the poly into the tardis. The inside, being bigger than the outside.