The night before last, we had a horrible frost. Yesterday morning, I was cursing the elements having to scrape a thick sheet of harsh frost of the car before going to work. Naturally, my thoughts hit upon the chillies that I situated into the poly tunnel the afternoon before.

This morning, having worried about them all day, I went to see if they were alive.

I had fleeced them, in the same way that the tomatoes are covered. 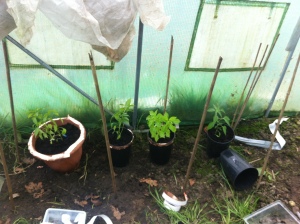 You can see in the top left corner of the photograph, the fleece is there. This was tented over the four pots as a protective measure. Having scraped off the ice on the car, I was worried that these things had been zapped to within an inch of their so far very short lives.

And then there is this

This is the purple haze cayenne that I bought from sea spring seeds at the edible garden show last month. That tiny little bud in the middle, that’s a flower. There a couple more tiny ones waiting to develop. That’s if the blasted Aphids don’t kill it off. Also, this is a very small plant still, I’m not too sure if it is supposed to be sending out flower buds. Perhaps it’s a bit comfortable in the 12cm pot.

The habaneros were sat in 7cm pots, and whilst they have started to pick up; some of them were trying to escape their pots. So they have all now been re-potted into 12cm pots. I think for all the chillies on the sills, this is probably their last temporary pot before they get their proper pots in the poly tunnel. The hope being, that they make it through the next six weeks and into the summer.

One thought on “#NABLOPOMO: Chillies Chugging along”