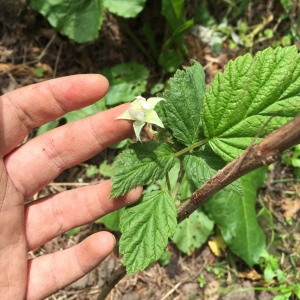 The fruit trees were positively frilly with blossom. The blossom has long since disappeared with the wind, and it is now possible to see whether or not the fruit has set. The concorde pear tree, which has til now had not a lot going for it; does appear have set something. Not many nobbly bits are visible on the otherwise quite leafy tree. But they are there. The braeburn, falstaff and worcester pearmain are also showing signs of fruit setting.

Then there are the raspberries. Now, we have a number of different varieties, which span the growing season. What you see is the first flower on the summer fruiting canes. Not many of the all season collection have sent out green shoots and runners. So it was a surprise to see a white bloom. I know that the canes have to be so old before they send out shoots and runners. All of the canes are what I believe to be two years old.

The varieties that I have are:

The latter two are the autumnal ones. Sadly, I can’t remember which bed had which other summer raspberries in. I have also seen the autumn raspberries start to develop white blooms. A bit early, but I won’t argue with mother nature. I remember last year that the autumn bliss were really an abundant cropper, even with two single canes.

One thought on “soft fruit flowers”