After a month in the dark, the spirit infusions were ready to decant. These infusions involve home grown raspberries and gooseberries. The raspberries broke down and produced  a lovely bright pink infusion. The gooseberries were still quite firm, and hadn’t broken down so much. Both however produced a decent level of end product. Both had been made with 70 cl of spirit. I managed to get 2x 250 bottles from each kilner jar, so I am pretty happy. The gooseberry infusion is rather like drinking a spiced curry.

There there were spuds. Above you see a 10kg bucket of pink fir apple potatoes. This is the first time I sown and grown this variety, and I have to say that I am rather impressed. We managed to get just under 10kg from half a 1mx2m bed. There is still that half a bed and another 1mx1m bed left to harvest. These a beautifully odd shaped potato, and we did get a few, ahem, rude shaped ones. I had to warn my mum in advanced.

Those were okay, then came these. 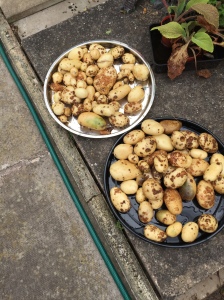 They look a bit scabby. I forget now, what these are now. Perhaps lady balfour or interntional kidney. I think they have been left in the soil a little bit too long. They will be okay, after heavy peeling. I refuse to say that growing things is always going to be rainbows and butterflies. It won’t be.