The festivities are over, the vast majority of people are going back to work. I have had an extra week, and some of it has been spent reflecting upon the start of the new growing season. In all honesty, I have been feeling a little behind and the allotment mojo has taken something of a nose dive. I usually have chillies sown after Boxing day, and this wasn’t the case. 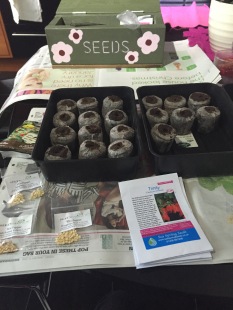 Given last years rather disappointing crop, I am reviewing the seeds that I will  be sowing. This has resulted in more than one sowing of seeds. Today I have found some jiffy pellets, and sown the first batch of seeds. Cayennes are the notable absentee from the list, but these will hopefully be sown in the second phase.

If you can’t access the video above the you tube video cane be view here.

In the first phase we have:

Some of these have been sown before, others are new experiments. Chillies are not entirely easy to grow. I have found that the hotter the chilli, the lower the chance of germination. Also, serious chilli heads will also use heat and light lamps to germinate. I don’t tend to use the heated propagator any more, as the seedlings that I ended up with were rather spindly and inclined to fall over. I have had greater levels of success with a cold propagator being placed upon a warm window sill.

Seeds were sown into moistened jiffy pellets which were sat in a gravel tray. I used warmish water, rather than cold; as this just make the for cold damp conditions that are not the best of seeds that are hard to crack open anyway. The gravel trays were then placed into a large foodbag, I would have done the same with pots, and then a transparent lid was placed firmly on top.

Hopefully there will be another sowing in a few weeks, and purple haze will feature.