As the Easter Weekend draws near, I thought I should check on the chillies.

The weather over the last week has been somewhat up and down. There have been says of glorious sunshine and days that like today, have been grey and miserable. The chillies, along with the tomatoes, have been enjoying the sunnier days whilst sat in Dad’s sun trap. However, there have a few nights where frost has been scheduled and they have covered over with a layer of horticultural fleece to protect them from a premature demise.

There a number of different varieties that I am playing with this year:

As you can see, there is quite a spectrum in terms of heat. It is the first year of sowing for devil’s rib and coffee bean, but all the others have been experimented with before. The hope is that these will be just a fruitful as their predecessors. 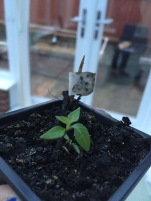 Purple haze is the only cayenne variety on the plot, and at the moment has seed leaves that have a really nice purple tinge to them. There are a few habaneros, some which like the coffee bean variety are somewhat slower growing. I have found that the hotter the chilli, the more difficult it is to get it to germinate in the first instance and that these are slower growing compared to say a cayenne.

Coffee bean, like prairie fire and sparkler, is a variety that produces fairly small compact plants. This should help with organising the poly tunnel as smaller pots can used. I say small, but I am probably going to use morrisons flower pots as per usual. They are really quite useful for chillies.

One thing that I do hope for, is that these will all catch up to where they should be. Sown later than usual, the plants  are developmentally behind where they might be. I would have expected the milder varieties to be a little more leafier. The combination of later sowing and not enough heat and light is probably the reason why the plants are still not so leafy.

One thought on “Checking in with the Chillies”