Since I have yet to play with the preserving pan and make jam, jellies and chutneys, I have been looking for experiments do. It doesn’t help that I have a lower than expected courgette threshold.

This week, I have considered two things.

But first, let’s look at what is actually working on the plot. 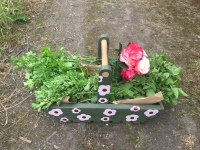 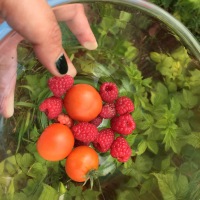 Vine ripened red-ish tomatoes and some rather lovely raspberries 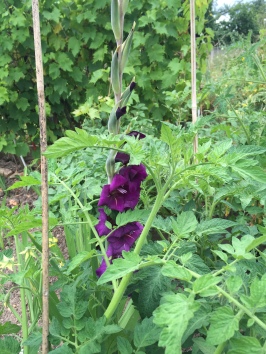 Plot tomatoes are sprawling, having absorbed a fair bit of sunshine and have sent out lots of yellow flowers. It is quite easy then to spot the red smudge of tomatoes as they turn red beneath the foliage. I somewhat revel in the going red, as with previous experience I have had to ripen tomatoes at home. The raspberries are a combination of polka, a well established set of canes and newly planted ones. Above, you will see that the trug is rather full. Contained in that trug was coriander and fenugreek from Mum’s half plot and my mint. I still have mint to harvest actually, it really is very productive.

And at last! The plot glads are coming through. It does feel a little delayed in happening, but I have spotted two of the blooms breaking up the green tomato foliage. I do rather like the purple ones. Though somewhere on the plot are black ones, and I’ve never seen those in bloom before.

Now, I said something about experiments. 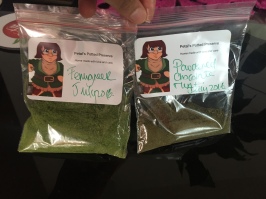 The experiments are two fold. In the first instance, I decided to find  dehydrator. Primarily as I fancied dehydrating chillies for chilli powder. However, we also have lots of mint and fenugreek. These were the first things to go in, as well as some garlic, red habaneros and also some mango. Garlic, didn’t go so well; perhaps I should have sliced it a little thinner. Ir’s still usable, just very very dry. Red Habaneros, had me sneezing and took over a day to dehydrate. These were shop bought though, from a local Indian supermarket and were effectively a pilot study should I actually get a few chillies from the poly tunnel. The mango was also shop bought, and was a collection of under ripe fruit that I wanted to make mango powder. I use mango powder for chutneys, it has further uses in Indian Cuisine. Again, an experiment; as it took two dozen mangoes to get 100g powder. I shall be reflecting further on the merits of garlic and mango dehydration. What did work well, and took hardly any time at all, was the drying of the herbs. I was rather pleasantly surprised by how green the powdered fenugreek was.

Then there is the second experiment. The rather boozy one.

First thing first, I have parental consent (There are people who will huff and puff at this, I assure you; as an activity that a bollywood young lady ought not to do. So let’s make clear, that :: blows raspberries::  Beyond that, not my roof, there are still agreed understandings). I am old enough-yes, I am-to imbibe it, and I’m not distilling anything. Look, there are far worse hobbies, and with less palatable outcomes. With the parental consent, comes the first refusal of quality control and production management.

(I had actually decanted a year old steeping of Cherry brandy actually, as Pop’s wondered where my experiments had gone from the pantry; so it’s not as though the experiments have noses turned up at them. Was a case of “Punam, you had bottles of gooseberry gin, where did they go?” You’ll have to imagine it being said in Punjanbi).

As you may already be aware, I dislike strawberries. However, the strawberry God was kind this year and blessed us with with pounds of the things. All frozen, they were waiting for their fate to be decided. With the preserving mojo a little off kilter, I wasn’t too sure about what to do with them. Then I remembered that I had a brewing kit, yet to be christened, and a second hand wine making book. Not to mention, some rather lovely Grape Family members who are rather experienced home brewers. (My immense and heartfelt thanks to these lovelies who have been so supportive in getting my experiments of the ground.)

It just had to be done really.

Fruit was defrosted and the kit actioned. There was a bit of drama this morning, as it became apparent that we were having a ‘Jaws’ moment.

We needed a bigger bucket.

Over night, as expected there was fermentation; happens when you add yeast, sugar and water. I awoke to the smell of fruity boozy-ness, and found myself fighting strawberries off with a plastic spoon. All in an attempt to not make a mess of the carpet in the garage.

Needless to say, we have found a bigger bucket. There is just over five litres of liquid in there. A demijohn is at the ready, to decant the must in the next few days. This is my first foray in proper home brewing, so you can imagine the nervousness, and the first of a list. But first, let’s get this one done.

(Sat here, it is impossible to avoid the waft of fermenting strawberries.)