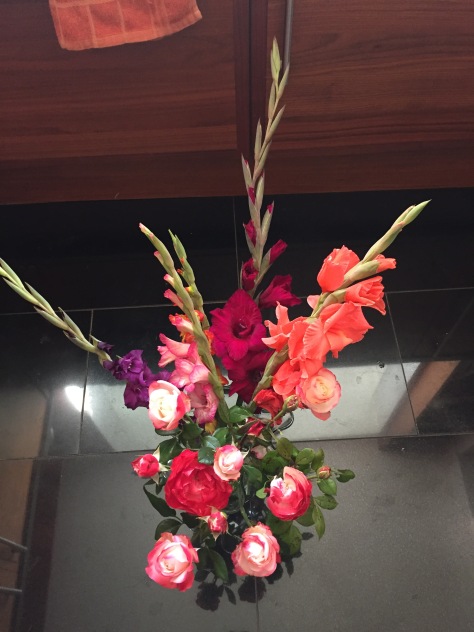 Looks quite pretty, doesn’t it?

A staggering great big bouquet of roses and glads, all grown on the plot; do not be fooled by the roses though. They were really quite thorny and somewhat vicious as they were cut. I have the scratches to prove it!

As aggressive as the stems were, the bouquet is simple reminder of the successes that can be had in having an allotment plot.

Thing is, this year, the season doesn’t feel as much of a bumper success as it might have been. It feels rather different compared to the previous seasons, and I’m not quite sure of what to make of it.

As we broach the end of August, I will have been dabbling in GYO seven years exactly. I have had an allotment plot for a little less. Something has seriously dented my allotmenteering and GYO-ing mojo.

In the first instance, the plot is not as productive as it has been previously. I think half of it, is exactly where I want it. I know, more or less, everything that is going on and how. The rest is something of an overwhelming wilderness where it does feel as though I have quite literally lost the plot. Mum’s plot on the other hand, is heaving and we are now officially sick of marrows and courgettes.

I’ve yet to get any marrows or squashes; the slugs and snails are chopping through what plants remain. There were strawberries, all now done and dusted having gone into wine. Currants were harvested, and they too have gone in home brew. Tomatoes are actually doing well; these are trussed up regularly, and one batch of green tomato chutney has already been made. In the poly tunnel, the chillies are on something of a go slow. Potatoes need digging up, though we have had small batches as and when required.

So what is it, that makes it all feel a bit, well, meh?

I have yet to break from work for a summer holiday; my summer holiday is delayed until the middle of September. Over the last ten weeks, work has been busy and there has been less opportunity to go play on the plot. With the plot being behind where it should be, that’s a double whammy.

I do have some time in the coming weeks re-commune with plot; that’s basically where I go wander, survey and try to formulate a plan as autumn and winter draw in. I can only describe the sensation as having lost a football match where you have been subjected to something of a goal rout. There is a serious loss of spark.

On a positive note though, it will be a year this week that I self published ‘Playing with Plant Pots: tales from the allotment’. I am as proud of it now, as I was a year ago; there was also the second book as well. I am taking both of those as a reminder that being on the plot can be positive, it is a learning experience and I enjoy it. There is a third book-not gardening and also fiction-that is in progress. Part of me is twitching, thinking, about writing another gardening book. I have the cover in mind! I just don’t know what I might put into it.

This could just be a duff year, or the figurative seven year itch. I really cannot tell you.