Dear allotment, I have not abandoned you. It might feel as though I have, but I haven’t. Honest.

This year’s growing season really does feel different. As though my mojo has dipped, and the erratic weather has made it feel even worse. I’ve also spent a lot less time on the plot due to real-life commitments, and this goes towards amplifying the feel of discontent. I am seriously missing something this year and trying to reflect upon how I might improve things now and also for the future. It’s not all gloom and doom: 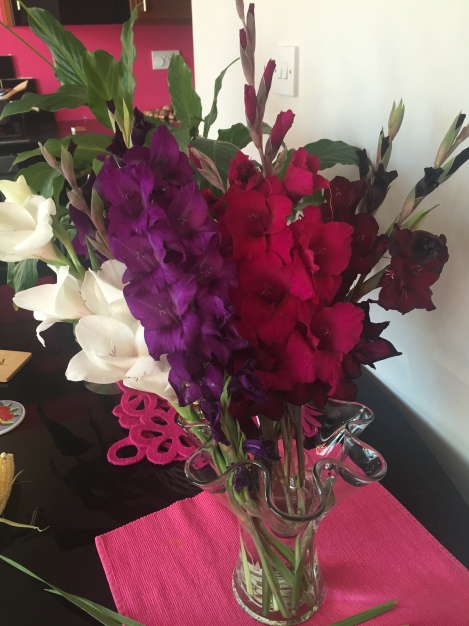 There are tomatoes everywhere. Green ones, yellow ones, striped ones and sometimes even red ones. I rather hoped that there would be; last year, we had triffids but no tomatoes. So we have fruit, and I’ve been clipping vines of fruit off so they ripen at home. We do have a few that whilst sat on the window sill, these have ripened. Technically, not all is lost and I have actually been able to make chutney. That did help with the lack of mojo, especially the part where I play with my preserving pan. I have, however, done a lot less playing with the preserving pan in comparison to previous years. The only preserving I have done, is the home brew! I thought I should give that a rest for  a bit, least of all on the blog. So  all is not lost with the tomatoes, at least. There is probably going to a poundage of green ones clogging up the conservatory for a brief period of time. I shall have to decide what to do with them, other than chutney.

You know, I have never ever, managed to get a proper cob of corn from the plot. Until now, that is. Mum had great success, and bounced home with three big cobs that once grilled, were a rather nice tea time snack. Needless to say, I was a bit envious. Especially, as I had sown all the seeds, and then divided everything between our two plots.  I swear, that we have different micro-climates and soil across the two and this means differences in crops.

The one thing that has actually kept me buoyant, would be the flowers. There were sunflowers on the plot this year. So glads and roses have been the main focus. Admittedly, the roses were a little slower and not as productive as they have been previously. The glads are also somewhat delayed. However, it has all been pretty. We have had stonking great big beautiful bouquets for the kitchen. (If I ever acquire a husband, he’ll have to box a bit clever should he ever want to provide me with flowers.)

One thought on “Not over, not yet. #gdnbloggers”