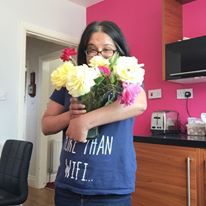 That is me, and I am standing on my allotment plot. An allotment plot that I call the sukh-Shaanti Garden. Loosely translated this name means happiness/joy and peace. I deliberately chose that name as that is what I hoped to gain from my allotment. Given how my life can get busy with school, volunteering and study; trying to find sukh shaanti can sometimes be entirely necessary.

It is also reflection upon on how the allotment feeds into my mental health.

Seven year sago, I finished my initial teacher training and was about to be come a newly qualified teacher (even after your PGCE you still have to do another year of in school development). Only, I wasn’t feeling particularly positive about the process; the end of the academic year was nigh, I was feeling rather stressed with no job and not sure as to how I had made it through the course in one piece. One day, after getting fed up of having filled in yet another application form, I threw aside my CV and thought sod it; I want to do something that doesn’t stress me out, is something of a experiment, and might have a positive end result.

What did I do?

I went to Wilko’s, picked up some seeds, compost and some labels.

I decided to sow those seeds-in May, somewhere around a bank holiday-chillies, tomatoes runner beans. These were sat outside-I knew very little then-put back in side, to and fro; there was a lot of researching that happened; before there were a series of pots lining Dad’s garden. I was determined to make a success of this experiment and needed it to get a balance.

The seeds germinated, became plants; these flowered and cropped.

We had chillies! Not to mention tomatoes, runner beans, I forgot to say about courgettes. I had managed to grow things.

Plus, I didn’t feel quite so stressed out. There seemed to be a bit of balance, focus, and also some positivity. I wanted to teach, I would get a job and do what I trained to do; the gardening was useful; very useful.

That was the first time that I realised that gardening was good for you. In the  very least, it gave you hope, focus, something to achieve. There was one big change in my mental health as the summer term ended(finished my PGCE-woo-hoo!), I had a few bits of employment as the winter drew in.  I had also developed more than an interest, I now fancied having an allotment. After all, go big or go home, that was the motivation.

And so the allotment came along-or rather, I found it, and put myself on the waiting list and waited till November. Plot 2A was mine, it was my sukh-shaanti garden. It’s been mine ever since, and  has also grown a little.

It is only now with hindsight, that I can see how having an allotment and growing seeds in dad’s back garden all seemed to make sense. Least of all because what I had sown and grown was used by Mum in the kitchen. The effect of the allotment upon my mental health never ceases to amaze me.

See that second picture of me, with the roses? Well, if grow such beautiful things,you just have to hug them and be proud of them.

There have been times when teaching and studying has rather frazzled me; yet taking a walk down to the plot with my wellingtons on and clutching a cup of tea has helped rub away low mood and anxiety. I do believe in the effect and with that, aimed to share the idea. Last year, I carried out a workshop at the Annual Conference of  the Association of Teachers of Psychology where I presented how gardening and horticulture had a positive physical and psychological effects that could be used within teaching and learning. The workshop started off with delegates colouring garden related images and ended with everyone sowing sunflowers. I was also able to raise seeds for all 200 delegates to have an envelope of sunflowers to carry out some mindfulness/gardening therapy themselves. I was really glad to hear that some colleagues had actually sown sunflowers and were reporting back success.

With Mental Health now becoming more and more present in the public consciousness, this also lends itself to the deeper integration of gardening and horticulture as strategies to support mental health concerns. Charities such as Thrive already offer horticulture based support. Gardening Leave, a charity that is sadly no longer running, used to support Veterans using horticulture.  MIND has also carried out significant work and helped to influence policy making.There is clear evidence of how gardening-just pottering-as well as therapeutic horticulture can have a positive impact upon individuals who are experiencing mental health concerns. In cases where there have been communal allotment plots used by groups, there is increased interaction with client groups reporting reductions in instances of low mood. They have felt valued and part of a community; they have improved social and emotional statuses. The effect of gardening and horticulture has been both positive and therapeutic.

Note that I have deliberately used the word ‘concerns’. Using the word ‘problem’ rather raises my hackles and I feel it only contributes to the continued stigmatisation of Mental Health concerns.

As an allotmenteer, I can safely say that gardening is a good strategy in supporting my own mental health. It was a deliberate choice to also include it when writing the first book; there needs to be a better awareness of both mental health and strategies to help those experiencing concern.

I do however have a few other hats. As a Teacher of Psychology, I am only to aware that the students in my classroom, may be experiencing mental health concerns or supporting someone with mental health concerns. As a trainee counsellor being aware is just as crucial. Mental Health permeates through every day life; with every one and every where.

There are of course many mental health concerns; from mild anxiety, depression to severe psychosis. Gardening and horticulture may not be suitable for all aspects of these concerns, but it can certainly contribute to management of some signs and symptoms. I will continue to reflect upon gardening and mental health; for me personally, it has been valuable beyond words.