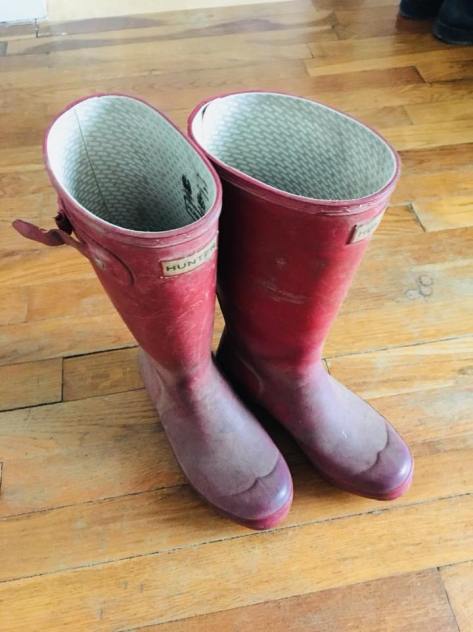 And so it begins.

Where did Mama F put my wellies? Where is my hand fork and transplanting trowel? Is it going to rain?

I had to go find my wellies, having not worn them in a while. Not to mention the gardening trousers and grey Petal hoodie. No idea where my purple gauntlets were either.

My plan had been to spend time doing coureswork today. Having been to supervision though, I didn’t fancy my chances with doing anything academic or cerebral. Nope, today, I wanted to restore my soul.

Today, I took a walk, to survey my kingdom. Today, I took the first steps to go reclaim it. I didn’t go by myself either. I had company, namely Mama who followed me with my edging spade and ladies fork-tools, that she has now claimed as her own and doesn’t really part with. I had two trowels and a pair of secateurs, not to mention a thermo mug of tea. Mama F does have her own plot, and that usually means we meet in the middle when it is time to go home. She came to mine to give me a hand, to make sure that the plot is neat and tidy. I have no idea what this means, but I do no that my plot has never been neat and tidy. Organised, but never primped, preened and perfectly manicured. Mama F can also dig for England, and that is what she wanted to do; that is all she ever wants to on my plot. I wasn’t going to stand in her way.

Luckily, I had a good twenty minutes before she arrived. Twenty minutes where I could stand there in my own space, in silence whilst thinking. And it felt good to stand there. Okay, it was cold, murky and seemed like a different universe, but I was there. Walking down to plot 2a, it did feel like the walk of the prodigal. I was going back to somewhere important, somewhere that I had left my soul.

Thank goodness for my Petal hoodie, it served it’s purpose.

My plot didn’t feel or look as bad as it seemed. It’s untidy, overgrown, but it still has it’s bones. Beneath the masses, is the body of my allotment; the skeleton and infrastructure that I had created hasn’t been eroded away.

Walking around, I got the lay of the land to formulate the plan. The plot is a game of two halves. The top half, with it’s open ground, fruit trees and rose buses is Project Othello. At some point, this was sectioned off into seven beds. I have never had much success with open ground; this is why I have raised beds on the lower half. In the last few years, barely anything except the roses and a dozen cherries has grown up there. This new start presents me with a opportunity to re-create that canvas. Covering this area, and holding it won’t make this whole process so overwhelming. I can still look after the trees and roses, there is even the odd raspberry cane. This will mean that I can focus on getting the lower half ship-shape, with raised beds being added to the top half later on.

As for the lower half, the raised beds can be cleared and covered too. I do need to think about what to do with the bare earth, and how weeds can be discouraged. I did prune down the roses too. There are plenty of roses on the plot, with about two dozen on the last count. Some are posh, some less so. Raspberry canes, the autumnal ones, were also cut down. There was a lot of fighting with, and clambering around with wild brambles that have been dotted around. I could have done with an Excalibur, some where as thick as my fingers and didn’t like the secateurs.

Today actually felt nice, it felt the right thing to do. I might not have shovelled tonnes of earth, but it did feel connecting and grounding. I don’t plan to rush this, this is a slow return. I can only do so much, and that’s the key here. I don’t want to feel overwhelmed and at a loss. Allotmenteering shouldn’t be like that, it shouldn’t be about perfection and living up to unrealistic standards.

So, we have a beginning. Let’s see what happens.