Peppers to put up

The initial plan for the day was to pot up rescued chilli plants. I had decided that i wanted some more in the poly tunnel; and in the coming days I try and find some more. I popped down first thing to have a general mooch, also to harvest gooseberries. More on the gooseberries later. Early on in the day, I was okay, I wasn’t sneezing so much; all was well. Fast forwards three hours to when I wanted to pot up the peppers; and I kid you not. Whooping sneezing; the horrible, squelchy, bogey-fied, ‘all right, there, Punam?” sort that has your plot neighbours wondering if you are okay and shouldn’t go home and lie down. With my “Yes, thank you, it’s just hay fever” response, I did try and carry on. I was going to pot up the chillies even if my brain made an exit. It took forever, to pot up those peppers and add slug tape. Once completed, I cried off; left Mama F and scarpered home whilst clutching rolled up balls of tissue. Mama F heard her first born whine and snort that she was going home.

Today was all about food. Making the most of what was harvested. Mum’s focus was all about the moolis-the things that I can’t grow-and mine was pudding based with gooseberries.

A lot gets written on this blog about growing, but not an awful lot gets written about eating; surely as a GYO thing, that is important! I was rather glad to see that the tomatoes aren’t doing too badly; the courgettes on the other hand, are a cause for concern with not a lot a fruit as they are slug/snail damaged.

So, first thing first. Mum harvested a few mooli. Declared that these would be dad’s lunch as she raised one aloft. There was also a handful of coriander that was harvested. I simply cannot get mooli’s to grow, I get seed pods. My mum on the other hand, was and is committed to the cause; she has sown loads on her plot and is now reaping rewards. Mooli-or japanese radish-is used not only as a salad crop, but Mum stuffs it into chappatis. With the coriander that she also harvested, today’s harvest was lunch. With atta (dough) already made, Mum grated the radish, added salt to the squeeze out the water; before seasoning with the contents of her spice tin. Adding to a rolled roti, this was then cooked on a tava. I had mine with a 5 minute raita as an accompaniment. You can also stuff chappatis with fenugreek, and this is next on Mum’s agenda. A note of caution, mooli’s are spicy, hot and blowaway the cobwebs. So if you don’t fancy the heat, stick with conventional radishes.

{You can find recipes for both of these in #plantpottales -the yellow one!}

trug of all sorts

As mentioned, before my focus was more sweet rather than savoury. This years gooseberry crop is exactly double compared to last year. Last, 250g came from the then new bushes. This year, with 500g, I’m making cake rather than jam, pickle or gin. I seem to have lost my jamming mojo, and will try to get it back at some point. The crop was added to a sponge mix containing desiccated coconut and golden caster sugar; one of the tins is still in the oven as I type. I fancied making a pudding, rather than jam as it seemed an interesting experiment to do.

So what happened with the cakes? 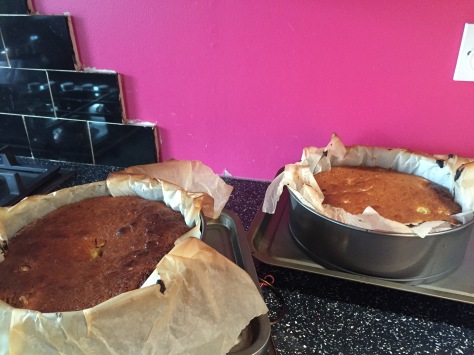 Now cooling. I assure you, they are golden and not burned!

Anyway, I am now dosed up with anti-hay fevers stuff. Exiting stage left; to feed to the veggies and harvest some roses.