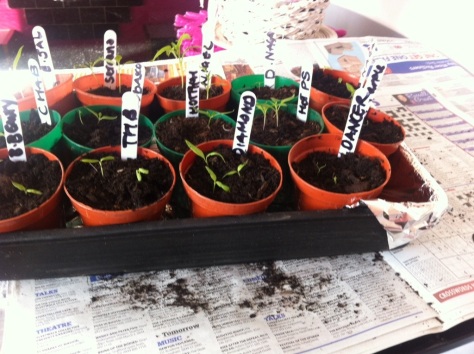 Have realised that the windowsill babies are getting on a bit. Some of the seedlings have started to grow past their baby leaves, albeit a little slowly. The aubergines have been growing quite quickly compared to the chillies. Thought I might as well pot everything on.

Seedlings are still a little small; but it is still very early. Perhaps won’t have more accelerated growth til later. I have for the moment removed the foodbag cloches. Just hope things don’t got pair shaped!

Finally, the cover for the 4TB has arrived. A little bigger than expected, but that is a lot better than smaller. I had purchased one that did turn out to be smaller, and of no use. This may be bigger, but it is also made of the same reinforced material as the wendy house and the poly tunnel. I am hoping, therein, that it lasts a while. That said, the cover that was replaced is in fact five years old. Apparently, the shop that made the 4TB has changed the dimensions, so I couldn’t an appropriate replacement. That said, to their credit, the company was very good about making amends. In the poly tunnel yesterday, it was a rather balmy twenty degrees. The best thing, that it was still there, and hadn’t floated off. The wendy house was there also, for which we are also thankful. The lyon prizewinner leeks are still there and quite snug too.

Tomatoes aren’t doing too badly at the moment. The vast majority of the seeds that were modularised have come through. The module was sat on the not very warm window sill, and so they did take their time. The babies were also a little leggy, which resulted in them having to be demodularised and then potted up. No mean feat, as I am not very good at pricking out and potting up. Which is why, I only sank singular seeds to begin with. In essence, at the moment, we have the same number of tomato plants as we did last year. It remains to be seen, if these will all achieve maturity.

On the next window sill, we have the the aubergines. Dancer, diamond, tres hative de barbentane  and black beauty have all come through. I am still waiting for early long purple to germinate. There was a pleasant surprise in how quickly the aubergine seeds have come up.

Of the chillies and superhots, I have yet to see any of yellow scotch bonnet and orange habanero. Fire has been temporarily written off in failing to come off entirely. The dorset naga looked a bit precarious, having caught a cold; it looked as though it was going to keel over. I checked this afternoon, and it did appear to have rallied. I’m not hedging my bets. I would like it to survive, one has a dorset naga chilli challenge to try! Have resown some california wonder, as i had somewhat neglected to re-sow a sweet pepper. All those hot chillies, and no sweetness. One is thinking of all the possible chilli jam to be made.

I have kept all the babies in foodbag cloches. Mainly, as they are on window sills that don’t always stay warm. With some heat and light trapped, the cloche offers something of a security blanket. I am conscious that a sudden drop in temperature could wipe everything out. I would like to place the tomato babies in the 4TB, under a fleece. Just not sure if they would survive, would be a tragedy for them to be annihilated after being pampered for so long.