Thanks to Marshall Seeds who kindly send me some heritage garlic varieties; and start with with arguably the first planting for next years growing season.

In general, Heritage fruit and vegetable varieties are still very new to me. Something that I tried to do this year and am looking to carry on into the future. Garlic is no different. It is staple part of many Indian dishes, and Ma will always use the crops that we produce on the plot in her kitchen.

Over the years, I have sown and grown many different varieties. The varieties in this batch are:

I have broken up the cloves from the bulbs. Each individual clove is then dibbed into the freshly dug over earth that we prepared last week. I say we, but in reality it was my mum digging it over and removing the weeds and grass that offended her by just growing. She doesn’t the weeds and is always trying to make the plot what she terms to be ‘tidy’, I do not know how the grass even dares, in knowing that it will be unscrupulously pulled out.

I am conscious that there is a risk of bird pulling the cloves out, so they are covered with only the tiniest bit of clove sticking out. Hopefully, they should be okay.

“Oh, Punam, I went to the Plot, your grapes were flat again. Tomorrow we need to fix them.”

“Oh, Punam, we didn’t see these. All of these marrows. We must have missed them.” 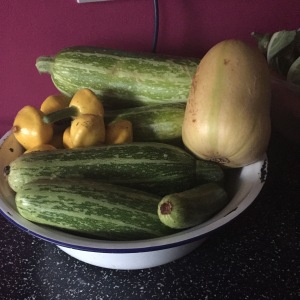 And so started the conversation, and I suggested we take a walk and see what the deal was with the plot. This week has seen a return to work, and teaching has started. I was in something of a daze yesterday at six in the evening, having finished teaching; so a walk this afternoon was scheduled as being necessary after a day of training. I am hoping to do some volunteer work in the coming year, so a large proportion of my day had already been spoken for.

That means chutney at some point this week.

We took a walk, and removed the last of the patty pan, sunburst courgettes. There are a few other yellow courgettes remaining; and soon they will slow down. Once all of the squashes have started to die a death; the aim is to take up the plants and compost them back into the ground. I know that I shouldn’t plant more plants than necessary, it is however difficult to not comply when your mum wants more than one plant. Yet we both get fed up of seeing frequently appearing squashes by this time of the year.

The climbing and runner beans are also starting to slow down. The last of them-she says-are now waiting to be chopped up and frozen.I had forgotten just how much you end up with, if you sow quite a few plants. We have had a combination of blue lake and cobra climbing french beans, as well as borlotto beans, scarlet emperor and painted lady runner beans. These had been sown in two batches, as I had been convinced that the one tray simply wouldn’t be enough. I think mum is quietly fed up now of chopping and freezing them. She is still to get used to the colour of the borlotto beans, I think they add character to the wig wams.

It has been a while since we have successful cropping of a butternut squash on the plot. The very first one was called Gladys, and this one would be gladys mark three. After all, even the ghost rider pumpkins are always called Bruno. I cannot remember now whether this is waltham or hunter. It is butternut squash nonetheless. There have been yellow butternut squash type thing harvested during the summer, more spherical in shape. Not too sure as to what will be done this with yet, but I am sure that it will be put to some good use.

Newly arrived today is the box of over wintering garlic that will be waiting to be sunk. I think the latest that I have ever planted is the end of November, so I am aiming to do sow sooner than that. This will mean clearing raised beds of the assorted plants before plugging in. I don’t plan to sink into open ground as the heavy clay tends eat the cloves and I also find it harder to monitor weeds.

It’s nice to see the over wintering garlic coming through. The onions have yet to start coming through; but the garlic is all on track.