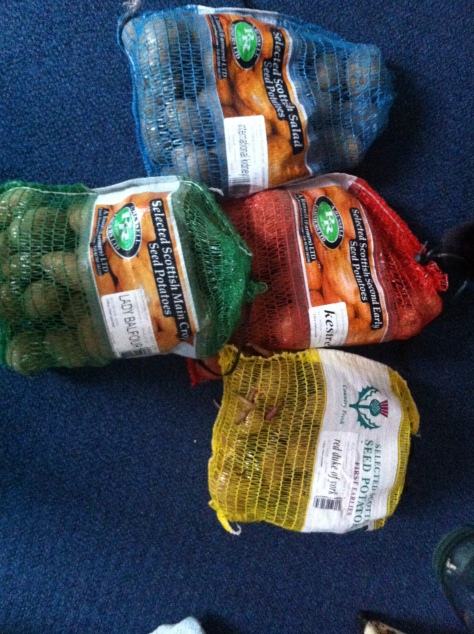 With the ‘lotment plot currently squelchy and for the some part underwater, it is bitter sweet to have potatoes waiting in the wings. This week, the ‘lotment secretary kindly popped around with some of the potatoes to be sunk this year. I had forgotten that I had also ordered King Edwards and Maris Piper from another source. In addition to this, I am expecting maris peer for later on in the year.

Selected for this year we have:

For me, that looks like a lot of potatoes. And I don’t have that much space, digging is not my favourite task either. Last year, there were three raised beds of potatoes. This worked quite well, with spuds planted in poop. The issues that arose were slug damage, and that meant we lost out on proper potato fleshiness. This year, decisions will have to be made as to where the spuds are sunk with the bulb planter. As i say. digging, is not my favourite thing to do, especially with heavy clay. The options are open ground, carefully selecting where as some parts get more flooded than other. Or in raised beds, with leaf mold as the beds need re-filling.

At the moment, it is raining and its windy; so the worry is that thatt the plot may not necessarily be as dry as it should be by the time potatoes need to be sunk. The other issue, is to chit or not to chit. I have chitted once before, and the entire crop died a death due to the rain. Last year, the spuds were left in an a box and self chitted producing long tendril like sprouts. These were removed before the spuds were sunk. This year, I don;t think I will chit. I simply don’t have the room, ma would not be happy about spuds littering the house.

Let’s keep our fingers crossed about the rain get less and the ground drying out.

2 thoughts on “potato plotting and preponderance”