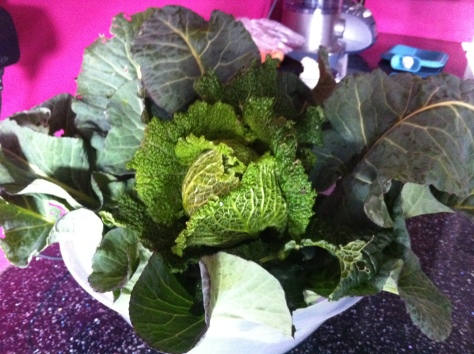 To date, my success with brassicas has been confined to the cauliflowers that my aunty tish gave me as plugs. Even then, they were hybrids. The sort that make traditional gardeners boo and hiss. At the end of last summer, I plugged into some brought plugs, of assorted brassicas. These were a  risk, with no idea of any possible success.

Plugged into raised beds beneath either fleece or net, these were left to their own devices. One thing and one thing happened. Slugs and slimers ate them. They also got a bit leggy as i didn’t space them out properly. Not much has survived, even less has hearted up and formed proper cabbages. I had seen a handful of plants that had somewhat avoided being turned into a lace curtains. What you see above, is some evidence. A small crinkly savoy like artefact. A few of the external, outer leaves were rather lacy, and have been removed. Leaving behind a diddly heart. This is nestled into a bushel type thing, which resembles what I can only describe as spring greens. This didn’t heart up at all. It was just a mass of leaves with a stalk attached to it.

Think the plan is to steam as an accompaniment to casserole. Must admit that I am cheered by having cultivated a crinkly savoy cabbage. Encourages me to think a little closer on sowing some more of my own. The past history for those has not been good; with the slimers decimating them, and then cabbage butterflies doing their thing too. I do have netting this time, so perhaps that might make a difference.

One thought on “crinkly cabbage and greens”