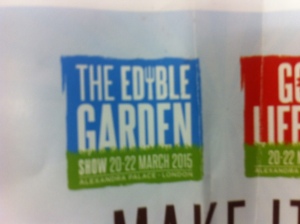 I booked my ticket a fortnight ago, having established that I would be away from work. I would have a few days off, and why not revisit The Edible Garden Show at Alexandra Palace in London. The ticket was reasonably priced, you would pay a lot more than the £16 to visit a tourist attraction in the Capital and especially on the first day.I queued, post full English breakfast, as did a few hundred others, having arrived before the 11 am opening. No one told me, about the steep hill from the Alexandra Palace train station. I huffed and puffed up the hill, to see the view over the city in the very crisp weather. It wasn’t sunny, as the world and his wife had just viewed an eclipse. The other event, that was happening that day.

The plan, was to not spend any money. This was an exercise in window shopping. Perhaps learn something too.

And that partly went by the way side. I made chilli based purchases, more on this later, but I didn’t come back to Brum laden with goodies. I didn’t fancy carting them all back, for one.

It was a nice day out, and having arrived early, I had a lot of time to walk around. Window shop, at first, what was around, work out what I wanted to see in the Expert’s theatre. As I got there, James Wong was running late and there were people already waiting. I kept walking around. There were a few schools there, kids and teachers, waiting for winners of Lunch growing scheme. I had empathy towards my slightly harassed looking colleagues, and the excitable kids.

I did spend a fair bit of time sitting in the Expert’s theatre, watching and listening.  I heard Pippa Greenwood, talk about veg, another chap talk about the factors that influence the vegetable patch. Last but not least, there was a question and answer session with the contestants of the Big allotment challenge. Was lovely to meet and speak with both Rob and Rekha. No, I didn’t swoon over Rob, and there were no screaming hoards that I had fight off to have a chat with him. Yes, I was surprised by that too.

This is not my first visit to an Edible Garden show. I made a visit to the show when it was at Stoneleigh. The show at Alexandra Palace felt different. It felt smaller for one, as though there was less there. I think I saw two seed companies. As well as a couple of equipment people. There was the experts theatre, and make/eat demos. Had I not left for the train, I would have stayed for the jam making bit.

It did feel very different to Stoneleigh, though I did go on the saturday that year. A lot less to look at, less hustle and bustle. Didn’t see alot on preserving fruit and veg, I think that would have been useful. There wasn’t anything there for me, that would have made me want to spend my money on goodies. Other than the two baby chillies. I feel that the show has lost a certain something. It just didn’t feel like a show, about edible gardens. There were poly tunnel people, greenhouse and shed people. Even furniture people. But something was lacking. A spark of something,

But I went, and even spent a fiver.