The jam pan has been sat idle since the summer, I’ve not done anything since then in terms of maslin pan preserving. Until now. Woke up today with the intention of avoiding all school work, quite a bit of that’s been done over the last few weeks. Today, we were going to make a variation on aubergine and mint chutney that I experimented with last year. Rummaged in the shed to retrieve the jars to be used. Washed them out, sterilised them. Today, we were to chutney.

I had to go find aubergines, I’m not growing any and not at this time of year anyway. Ma wouldn’t let me pinch the ones that she and Dad were going to have for their dinner. Four medium aubergines took a while to chop. Not to mention the red onions and fleshy tomatoes. The red pepper was simple enough. As well a few spices from Ma’s pantry and red wine vinegar. Did I mention the dozen or so dried chillies? It’s a good thing that chutney changes flavour with time. At the moment, chillies and red wine vinegar make for an interesting combination.

This started out as a me thing. I will make chutney today. 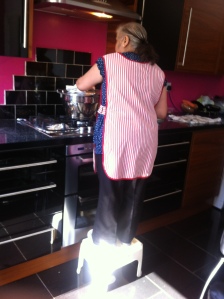 I was wrong, the ‘production manager’, namely my mum was going to  help. She’d help me, if she could carry out her own seed sowing experiment, She has saved some indian baby pumpkin seeds, and wants to sow them into pellets. Plus, if the two of us chop, then it doesn’t take too long. She’d also, dragged along the stool before I could occupy the hob. I was not going to get a look in, and this is, after all, her kitchen. I spent a lot of the process by her elbow as she tended over the jam pan. Plus, the mint in question, is her home grown mint. Harvested and dried, it’s in there somewhere.