Has flaming June been hot enough for you?

The last week has seen a heatwave move across Blighty. With that, the levels of UV and Pollen have skyrocketed. For me personally, this has meant staying away from the plot as the grass pollen tends to assault my senses and render me sneezy with bogey overload. I can be stood there sneezing and on loop as soon as I get there. At one point, I was dragged away and by my mother whilst trying to find roses.

Today, the weather is distinctly cooler and I can actually stand up straight without having been kiboshed by pollen.

This morning, I have taken a walk down to the plot and tied tomatoes against canes. I have Roma and Marmande varieties sunk into raised beds, and do rather fancy finding some more. If I do manage to successfully cultivate anything on the plot this year, I would like it to be tomatoes; additional plants are on my shopping list for the weekend. A simple as job is and of staking tomatoes, I am glad I did. Over the last few months, going to the plot has been a challenge. For a whole host of different reasons, I  have rather lost my zing, and I could feel it all too much. I pottered on the plot this morning, I wandered around-like the proverbial cloud-and then decided that I wanted to see what fruit was growing. I had forgotten what it was like to wander around, pull out weeds, trample over blackberry bushes and just take in the scent of roses. I stood talking with a ‘lotment neighbour, and a gentle breeze carried the scent of zingy lemons towards as we spoke.

Last weekend, I was able to harvest a handful of raspberries to put into jelly-yes, fruit and jelly-along with some black and redcurrants. There were also some red, yellow and green hinonmaki gooseberries that had appeared. 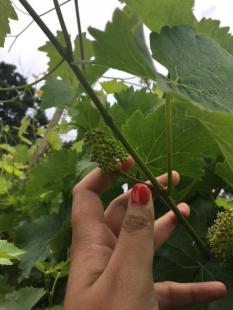 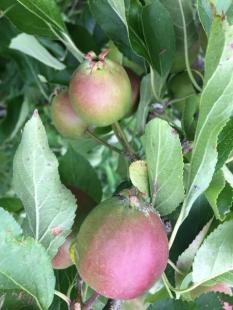 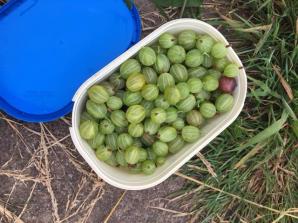 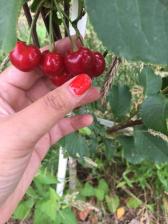 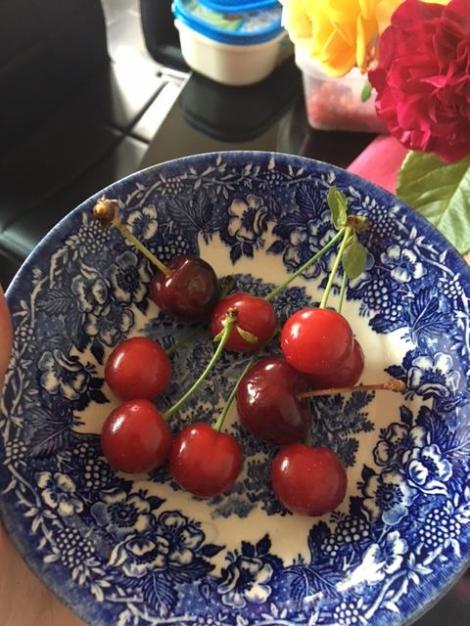 There are gooseberries and raspberries on my plot and also Mama F’s, so I have picked a few of these to take home. I think I have got most of the gooseberries, having had a fight with the bushes; I had forgotten how vicious the damned things can be. Last year, I had made gooseberry and chilli jam. Prior to that, I had steeped some in Gin-now that was interesting-I have yet to work out what I will do this year. It is currently a toss up, between jam and Indian Amla Pickle.  It has been far too long since I played with my preserving pan; I need to find the moments, my mojo and a bit of fruit to do it with.

Mum has more raspberries than I; the pinks ones on my plot have never actually taken root and flourished, with the yellows being something of a saving grace when they do crop. A small harvest was made of raspberries and currants; mostly red as I am waiting on the black and white ones to ripen.

Seeing red and purple cherries did make me smile. This is by far the largest harvest that we have to date; I’ve picked those eight, with a few still left to ripen on the morello. The varieties that I have are stella and morello, and these were from Victoriana Nursery in Kent. So far, I have been lucky and not lost them the birds on the allotment.

Given how the weather has only just found it’s footing, the three plot grapevines are foliated and the some. Amongst all of the leaves are small clutches of baby grapes. I don’t remember having any grapes last year, so seeing the bunches is heartening. Not sure if they will make it to homebrew, but there is always grape jelly as an alternative.

floral trug with fruit and roses

As well as the fruit, there are the plot blooms. Roses are coming up lovely , and filling the floral trug with blooms is always nice. I am waiting for the glads to kick off; right now, they have risen blade-like from the dirt and are very green and leafy.  I cannot even begin to calculate how much the rose blooms might actually cost.  They are by no means perfect; they are au naturale, if you like; but they do smell and look lovely!