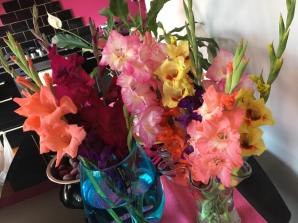 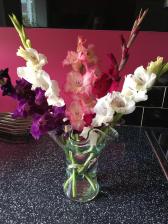 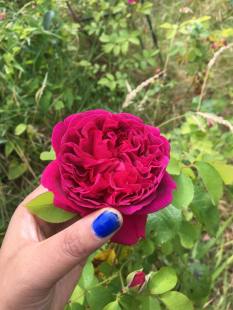 It might be the bleak winter, but think of all the roses bushes currently having a good kip. There so many rose bushes on the plot, I have lost count. Each one is fairly well established now and produces a bounty of beautiful roses over the summer. This year, I was surprised see one or two still going in early November. Things have been all very confusing, given the heat wave and bizarre weather.

I used to have three different blooms on the plot. I have the rose bushes, would sink gladioli and then also sow Sunflowers. It’s been a while since the latter two were done, but who knows; next year might see a revival. Having massive great big sunflowers on the plot is a sight to behold. Are probably the one bloom that doesn’t feel like a cut flower and very rarely makes it home to a vase.

Roses are fairly robust, but do suffer in the heat. This year, I had far fewer blooms compared to previous years as we had so little rain. Roses need to absorb a great deal in order to manifest all of that foliage they come with. Planting dormant roses in the autumn and winter months allows them to bed down before kicking off in the summer. They do take time to establish, at least a couple of years. They build their crescendo slowly. When they do blossom, dead heading and having cut flowers ensures their longevity. I miss the scent that wafts from the kitchen sill when there is a fresh bouquet in the house.

When the roses are in full flow, I have easily collected a bouquet a week and then ran out of vases. In that case, they were distributed to loving homes. Some of roses are posh, they have names. The others are lost label roses and I have no idea what they are called. All of them, are beautiful and enjoyed. I do wonder sometimes, how much a bouquet might be priced at, even if the enjoyment of them is really quite priceless. The only thing to be mindful of, would the thorns. That and trying not to cut your fingers off when deadheading. As pretty as they are, roses can be vicious if not played with nicely.

The Glads are the other glamorous flower on the plot; some of which are bigger than me when fully grown. Depending on what is growing alongside, they often look like fireworks going off in random directions.  Glads are relatively easy to grow. I choose not to lift them; mainly as I can’t remember where I have put them, and really don’t like digging.

This was rather special this year. A handful of allotment grown roses actually made into a very important bridal bouquet. The big red one in the middle is actually from Dad’s garden with all the fluffy bits from the shop. If I ever get that far, I’d like to think that I might have grown my own bouquet.