Woke up early-for a Saturday-with the prime mission being to sink Gladiolus. The box of which, was nearly as big as me, there were certainly a couple of hundred them. Yes, I know that’s a lot, so a few were given away to plot neighbours. Have opted for a mix of colours, but there were some purple ones in there as I specifically wanted these. There were also some giant gladiolus too. It was nice to see that some of the corns sunk last year, are sending up shoots for this year. Last years crop was something of a fluke, so am hoping this year will be just as good.

This took up a great deal of time, though there were moments where I did get slightly bored and had to focus on something else for a few moments. This meant digging up docks that had somewhat pervaded the shallot bed. Pulling out and bashing clumps, whilst trying not to decapitate the purple stemmed shallots that actually looked  a bit on the small side.

The sinking of the gladiolus didn’t take too long, provided that there were these momentary pit stops with other tasks. Even fed the roses today. Have never done this before, usually just leave them to it. However, now that the ones on the plot are fairly established, thought it was worth a shot.

Then I caught side of the tomatoes. Dare I sink these? Well, at home there were the climbing french beans and the squashes. Ma wanted her window sill back, so the squashes have come out. They’ve had a day or two in the sun, not exactly hardened off, but the weather is relatively mild at the moment. This is way earlier than I have ever thrown them out. And once more, not in raised beds. Blue pellets of doom have been scattered, along with experimental cabbage collars to even more preventative. I don’t hold out much hope here.

The climbing french beans had to be sunk. Cobra and blue lake, were sunk with a bulb planter; whilst clinging to their paper pots. The running beans, are somewhat pitiful looking. Enorma, has failed me once again. There are some additional sowings of scarlet emperor somewhere, that will be planted out at some point.

I had to go, before the sun got to my head. Plus I was hungry by two, and had been floating around a very long time.

These are growing like triffids. Perhaps not as big as plants this time last year; but still have some time yet. I am aiming to have them planted out at the bank holiday weekend. Suggesting that they will need to be hardened off soon.

There is growth in the four tier blowaway. The danver carrots are starting to break through and become seedlings. Have yet to see any autumn king carrots. I have never had any success in germinating and propogating parsnips, and as you can see we have a handful of babies making an appearance. In comparison to the carrots, these have taken quite a while to come through. Not uncommon to the experiences of other people. Golden self blanching celery is also coming through. I appreciate that there are lots of seedlings in the pots. Alas, sowing them seed by seed is somewhat fiddly.

The chillies, bells and superhots are taking great strides. There is of course a variation across all of these given when they were all sown. Nigel, Pretty Purple, seranno, patio sizzle and hot thai are reasonable stout. Whereas as others, the hots and superhots, are actually quite slow growing. Early Jalapeño, Nigel, hot patio sizzle are starting to flower, which could actually be a sign of stress. All of these, are very, very thirsty. I observed that last year with the pretty purple rainbow chilli. Need a litre every other day, otherwise it would shed its leaves and flowers. 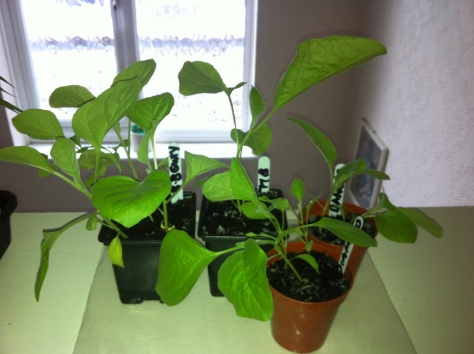 Arise of the triffids, the first batch! These are of course the aubergines. Early long failed to make it. So we have tres hative de barbentane, diamond, dancer and black beauty. Very, very leaf, and velveteen. Suggests that they are quite delicate at the moment. The aim, is to have them planted into the poly tunnel with the chillies and bells at the end of May. Prior hardening off will be required.

In other news, marketmore, femspot and crystal lemon  cucumbers are germinating both in the four tier blowaway and the window sill. Hoping to sow runner beans and sunfloo’ers at some point. There will have to be rotation amongst the wendy house and four tier blowaway.No cabbages and brassicas yet. Though we did harvest some purple sprouting broccoli.

The sun is out, the the wendy and poly are steaming warm, and I am still sore from planting potatoes. With today being the first of April, I thought I could rest a little and sow squashes and cucumbers.  We have a frost until the end of may, that leaves approximately eight weeks during which these seeds will hopefully germinate and are likely to become triffids.

For the moment I have now sown a ghostrider, I fancied something of a break. A few additional varieties of winter squash have been sown instead. No small pumpkins either, I wasn’t particularly enamoured by sweet dumpling. That’s not to say mama H won’t encourage me to sow one. Many of these are sprawling varieties. Last year, there was success with the Cobnut butternut squash being grown up bamboo canes, rather than out across the ground.

The runners and riders:

There are quite a few varieties, but I do have a tendency to sow a large number. Besides, not all of these may actually germinate. Half of these are to be observed on a warmish window sill, the others will be in a unheated prop in the four tier blowaway. The 4TB does actually get quite warm now that it is warming up a little. I take solace in the fact that the celeary and the carrots sown in there are just starting germinate. The hollow crown parsnips have yet to make an appearance.