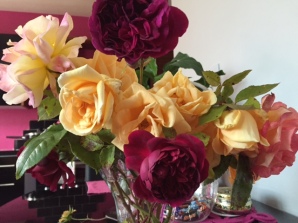 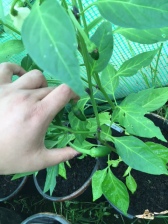 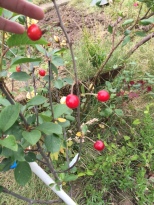 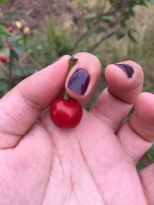 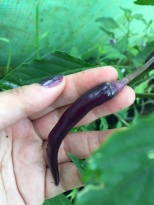 If it wasn’t for this lot; I would wholly miserable. There are no runner beans on the plot, the courgettes have all mostly been written off. I should at this stage in the growing season be starting to swim in courgettes. At the moment, I have the grand total of zero. All the plants have been subject to carnage by slugs and snails. I would be very surprised to get something, if anything, over the coming weeks from the courgettes and the rather spiny and spindly looking courgette and runner beans.

On the other hand, I am very close to throwing a small histrionic fit over strawberries. Every other day, I have been harvesting between 1-2lbs of strawberries. I say harvesting, it’s a case of picking the fruit before the slugs get to them. I would really like someone to invent a machine for hulling and chopping. Fruit has been stashed in the freezer; I am hoping that my jam making mojo returns so that the strawberries can be spiced with chilli and redcurrants maybe.

Tomatoes have filled out and up, with fruit forming after the bright yellow flowers. Mum had a lovely large marmande one, only for it to explode. I suspect that it might have become over ripe; a couple of money make have turned as has one single solitary tigerella. The surprise however, has to be the fleshy and fruity morello cherries. This is the first year on the plot and the tree has done very well to have survived frosts and inclement weather. There are less than a dozen cherries, but these are rather special in being the first ever crop. Have only pinched three ripe ones, so we shall see about the others. All being well, they will be harvested before the wildlife gets to them. I think I actually jumped to see that the cherries had turned, they were squishy to the touch, that’s the only way I can describe it. Though I have probably picked them a little early. I guess they could have done with a little more sunshine perhaps, and turned a little darker still. There are three sat on the kitchen window sill next to the tomatoes, so they may turn yet.

With the roses blooming on an almost daily basis, the gloom does lift a little. I have been waiting for William Shakespeare 2000 to bloom, and you can see the first three blooms that have developed this year.  The bouquet above also contains a raft of lost label roses, the yellow one is rather productive. No idea what it is called, but it’s a brown limbed creature that cascades outs. Might even be a climber, but it is rather nice to pick.

In the poly tunnel, the chillies are also getting going. There are lots of white flowers and also purple tinged purple haze flowers. Jalepenos are starting to form as are hungarian hot wax. You see the one purple haze chilli, that I am hoping will turn red. The jalaepeno, apache chilli, orange habanero and devil’s rib have formed large white flowers. In comparison, patio sizzle, prairie fire and sparkler are forming the most delicate, tiniest of white flowers. With all the plants in flower, this means feeding regularly and making sure that the plants don’t get too arid. They do dry out, but too little water and the flowers will drop off.

So there we have it, we can’t be too miserable, now can we?