You know, I haven’t sneezed so much this week. This may be down to the slightly wibbly wobbly weather. I am however now rather tired of seeing strawberries. As Wimbledon has drawn to a close, and the single handed champion-yes, that’s what the men’s winner is called-was told game, set and match; the crop has started to reduce.

With the strawberries waning, there are other things compensating. 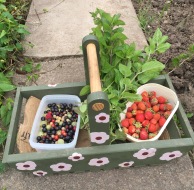 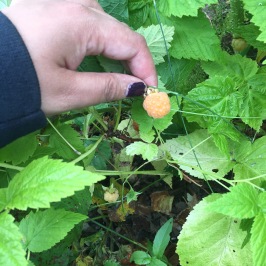 We have blackcurrants and red currants; in an increased quantity to previous experience. In fact, when the rain abates, I will go double check the red currants that need harvesting. There are strings of the things, and the plants themselves are relatively new. I have yet to figure out what to do with the white Versailles currants. The red ones are most likely to be jammed or preserved in one way or another.  In harvesting black currants, I do quell and resist the urge to say  ‘this children, is where your ribena comes from’. And these are not diddly things, they are rather round and squishy berries, that really do evoke the memory of ribena.

As mentioned before, the strawberries are now dwindling. There are several pounds that have been frozen. As well as currants, raspberries are starting to come through. Having replaced the slightly dodgy canes, the newer ones are establishing. Donated by a friend and colleague,  this is a polka cane and this the pink fruit that you see. These are rather plump and juicy things that are being stored for jams and things. The yellow one that you see, is technically an autumn variety called ‘Fall Gold’. These do kick off rather early, and are just as good as the pink ones.

So there is a lots of sweet stuff.

In the poly tunnel there are a number of different chilli varieties. What you see above are examples of purple haze cayenne and jalapeno. I have removed the purple haze as the poly is cooler than expected at this time of the year. It is now sat on the window sill next to unripe tomatoes, and hopefully it will turn to the bright red cayenne that is so familiar to chilli eaters. The jalapeno that you see, I found by fluke and you can see that it is actually a decent size. There are few other fruits forming on the plant, and I will keeping an eye on this one to see how it changes. Apparently, jalapeno crackle as they ripen and change colour. I have in the past, made jalepeno chilli jam. And I remember, the pain of having chopped them up. The moral being to wear gloves on handling. I have also spotted white flowers on the adopted apache, as well as the chillies such as prairie fire, patio sizzle, sparkler, orange habanero, coffee bean and devils rib. These are chillies that are smaller and a different shape to the familiar cayenne and jalapenos, with an altogether different flavour as well. Previously, there as been a good level of success with the patio sizzle. Small and pointy fruit, with one hell of a kick.

And no….I don’t paint my nails so that they match plot produce. Not really….honest.

One thought on “Sweet and Spiced #gdnbloggers”